It all began in the fall of his 17th year. Without that encounter, the Japanese-style painter Hiromitsu Kato would not have been born.

Ever since he was a child, Hiromitsu Kato loved to draw. Black lines run across a blank sheet of paper, and a world is built. Animals that could not exist in reality, strange plants, and people whose appearance is far from reality, all existed in the world on the paper. There was freedom.

One day, when his mother asked him to go to kindergarten, he vehemently refused. His mother was annoyed by her son’s resistance, saying that he would not be able to draw.

If you don’t go to kindergarten, I will put you in the warehouse.

At the time, there was an old storehouse in the Kato family yard. A child would have been terrified to be thrown alone in a dimly lit place.

But he was different. He took a piece of paper and a pencil and went into the storehouse himself. And he did not come out until nightfall. The storehouse, with its paper and pencil and no one to disturb him, must have been his utopia.

His mother gave in and he was free to spend his time painting.

It was only natural that he should dream of becoming a painter.

–I want to be a master of the world.

From the moment he decided to become a painter, he aimed to go to an art university in Tokyo, but he ran into a problem.

He could not decide on a subject.

I have a goal of painting,” he said. So the sculpture department is different. Design is not what I want to do. As far as painting is concerned, oil painting is the best, but the technique does not suit him.

At that time, the only painting technique he knew was oil painting.

One day, three months before his university entrance exam, he was in a department store in Sendai when he came across a “Nihonga” painting.

When he saw it, he cried. He cried without being afraid to be seen. It was that shocking and joyful that he had found what he had been looking for. At the age of 17, he had finally found the perfect technique to express his world.

He would never forget the excitement of that day for the rest of his life.

He decided on the department he wanted to enter and moved to Tokyo with great enthusiasm, but on the day of the entrance examination, he was immediately thrown off the track.

He realized the difference in information and skills between himself and the other examinees. The difference was in the tools he brought with him for the practical examination. Students drew their assignments using beautifully sharpened drawing pencils and kneading rubbers. On the other hand, Hiromitsu Kato carried a writing pencil and an eraser. I was simply stunned to see him produce a number of pencils of different shades from a fine case around him. It was strange to draw a sketch but see eraser shavings strewn at my feet, while the others did not seem to sweep up the eraser shavings.

The first year resulted in tears and he had to attend an art preparatory school. The art college’s Japanese painting department has a limit of only 20 students. In order to pass through the narrow entrance gate, he began to hone his skills. After three unsuccessful attempts, he was admitted to Tama Art University.

He took the first step toward becoming a Japanese-style painter and attended university and graduate school, where he thoroughly studied the techniques of Japanese painting.

Nihonga is a special technique. He draws lines in black ink, applies crushed shells and precious stones to Japanese paper with animal collagen, and applies color. Sometimes gold or silver leaf is used.

Because these are expensive art materials, it costs quite a lot to paint a single picture. He had no money to spend on entertainment, so he cut back on his meal expenses and used it to purchase painting materials. The year he graduated from graduate school, he was 6 feet tall and weighed only 55 kilograms. He had a skinny body with only bones and muscles, and his eyes moved busily, giving him a suspicious appearance at first glance.

Even with such a figure, there were apparently people who took an interest in him. The year he graduated from graduate school, he got married.

After starting a family, he continued to paint. The woman who became his wife married Hiromitsu Kato, a “painter. It was her hope that her husband would continue to paint. Around this time, he began to have doubts in his mind.

After graduating from graduate school, he began to exhibit his paintings at prominent exhibitions in Japan, winning awards. The acclaim was high, and at first he was satisfied. However, this recognition was only in Japan.

His goal is to become a “world master. However, he had no image of being able to enter the world’s art world at his current state. The Japanese market, especially in the field of Japanese-style painting, was primarily a domestic market and was hardly appreciated overseas.

–I want to be recognized on the world stage.

The Gagosian Gallery in New York. To be recognized by this gallery, the most prestigious and influential in the world, was the fulfillment of his goal of becoming a “master of the world.

This desire grew stronger every year. However, he wondered how he, without any contacts or funding, would ever be recognized in the world.

Despite his worries, he could not give up his dream, so he decided to leave the Japanese art world to compete on the world stage.

All he could do was to keep painting and always tell people around him that he wanted to go out into the world.

He believed that continuing to paint would lead him to his dream.

Soon after, invitations to exhibit abroad began to come to him one by one.

In 2009, he stepped on Spanish soil for an exhibition in Spain. He had participated in many exhibitions abroad before, but this was the first time for him to visit Spain.

There he met a critic. The critic praised Hiromitsu Katoh in front of the local media and gave him some advice.

He concluded by saying, “If you want to go out into the world, you need to do a lot of big paintings.

I’ll be waiting for the day when you come back to Spain with a big painting.

In 2011, he broke new ground in his painting. It was a cherry blossom painting with countless petals, a complete departure from his previous line drawings.

This painting surprised everyone around him, but it also marked the beginning of a new “phase” for Hiromitsu Kato.

The events in Spain were a turning point for him.

Following the advice he had received at that time, he accelerated the speed of production in order to increase the number of paintings. When he found that he could not produce as many paintings as he had planned, he increased the number of solo exhibitions from once a year to twice a year, pushed himself harder, and continued to produce works of art.

With intense passion, as if his life force was on fire, he pushed forward toward his dream.

Then, in 2019, he landed back on Spanish soil. As promised, with several large pieces of work.

It took 10 years, but I finally fulfilled my promise.”

He smiled as he was interviewed by local media.

His solo exhibition held at the Japan-West Center of the University of Salamanca was a great success. Another step closer to his dream of becoming a “world master.

Spring had arrived. Although the cherry blossoms are already in full bloom in Tokyo, they are not yet in full bloom near his studio in the mountains of Saitama.

After a short break, he picks up his paintbrush again. Next March, he will hold a solo exhibition at a museum in Yokohama. He intended to fill the entire venue with his new works.

He told his greatest friend, with whom he had spent more than half of his life, that he had enough work to fill the walls of the Gagosian. This was undeniably good news for his wife, who had always supported his dream.

Two days later, Hiromitsu Kato passed away. Coincidentally, it was his wife’s birthday.

Everyone lamented that it was too soon, that it was just the beginning. But he left us everything we needed.

The words, “We have everything,” and the remaining works.

The baton was passed on to the next.

The dream of the boy who cried so hard in front of the Japanese paintings that day remains in the hands of those who are left behind. 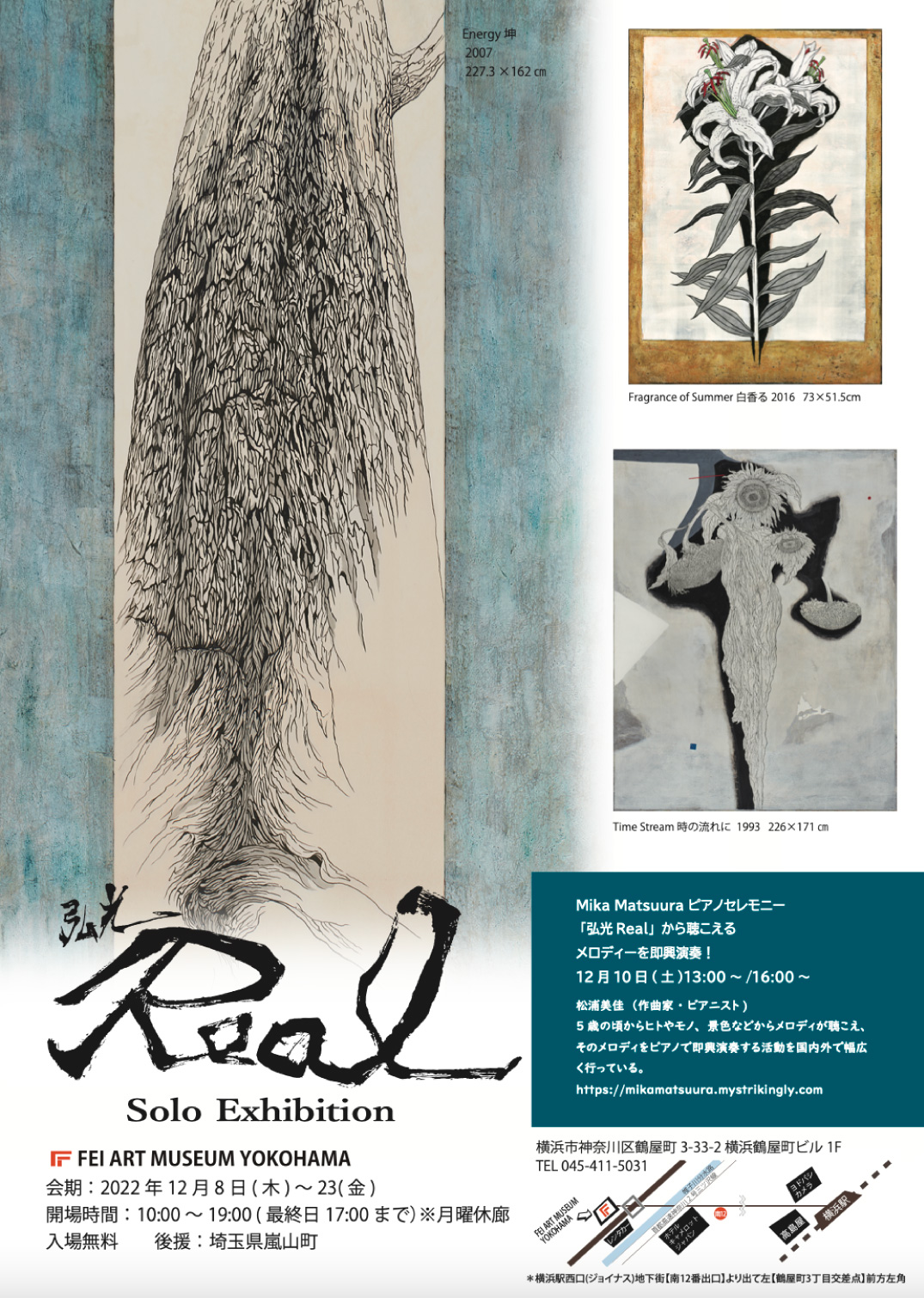